From Provenance to Now: a Story of Marketing Success. 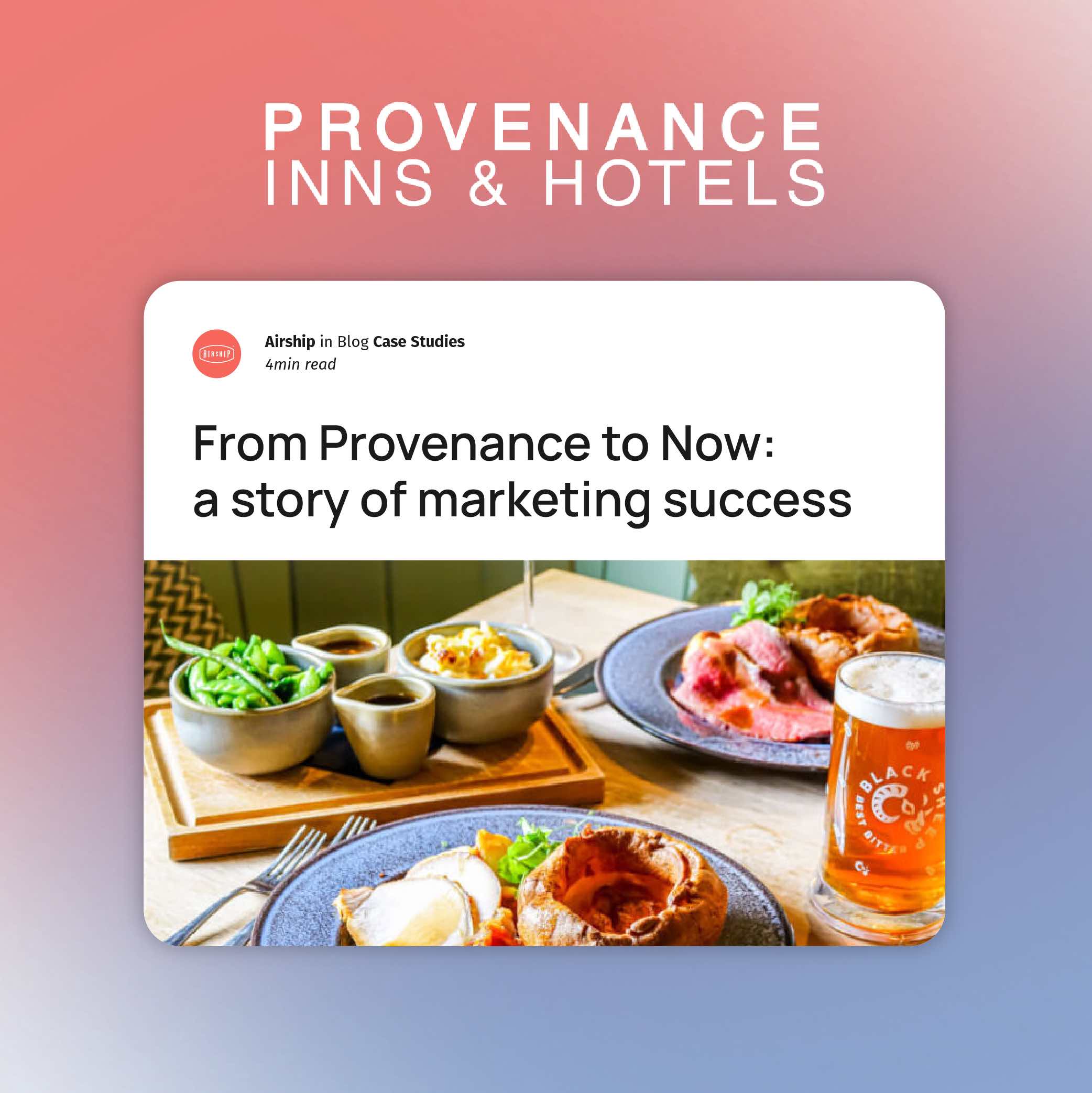 From Provenance to now: a story of marketing success.

The Provenance Collection first signed up with Airship back in June 2021, and then joined Toggle in October. Since then, they’ve seen some real results from both our platforms. ‘Toggle and Airship have simply transformed our marketing strategy’ said Tom Patrick… read more to find out how.

The Provenance Collection and Airship

Having come to Airship with an initial database size of 12.5k, they increased that by 70%, to 21k, shortly after joining up.

This is down to them signing up to a CRM with many, many amazing integrations, allowing them to effortlessly collect data from multiple sources. Our integrations with Feed It Back, Wireless Social and Zonal Tables allow The Provenance Collection to build a knowledge-rich database with insight into who they are, what they ordered, which site they visited, when, and how often they come.

Once the data was flowing in, they could use Airship the right way: to automate engagement and drive incremental visits.

By issuing Zonal EPOS voucher codes within emails, they’ve been able to run campaigns that get lapsed, prospective and existing customers into venues. But wait, there's more…

In January (a notoriously quiet month for hospitality businesses), Provenance reached out to their audience and offered 33% off food for the entire month. This email achieved a whopping 45% open rate and a 35% click rate, and saw 2295 codes divvied out to their guests.

We know that this result can be in part to their use of our ‘Subject Line Testing’ algorithm. This Airship feature may have contributed to their phenomenal click rate result, by testing a selection of subject lines, and analysing which will be the most responsive from their audience.

The Provenance Collection has also seen success with Toggle, the Hospitality Commerce platform.

They began gifting in October 2021 and, at the time of writing in early March, have comfortably made six-figures in gift card and experience sales through their Toggle store. These guys are true champions when it comes to experiences, having utilised their webshop to meet demand. Knowing their clientele is one thing, but creating prepaid gifting options: such as a ‘Garden Tour & Lunch’,  ‘Afternoon Tea at the Cleveland Tontine’ and a ‘2-night stay at the West Park Hotel’, has meant they've tailored their packages to offer gifts that their customers will love.

Their success doesn't stop there. Over 50% of their online sales are for physical cards. Meaning that without utilising Toggle’s full (designed, manufactured, packaged and posted) physical card service, The Provenance Collection would have missed out on a third of their gifting sales.

On Black Friday 2022, using Toggle’s smart promotions features alongside an array of experiences, they managed to beat the previous year’s revenue that they had pulled in with a different gifting provider. No shade.

So there you have at; a quick rundown of how The Provenance Collection have taken full advantage of Airship and Toggle. They’ve used our integrations in order to have a seamless gifting operation and to collect data from various touchpoints tapping into additional revenue streams - a gifting and CRM empire in a matter of months to help fuel their growth!

But don't just take our word for it. Tom Patrick, Head of Marketing has said:

‘Toggle and Airship have simply transformed our marketing strategy. Although this is the 3rd time I’ve onboarded both, the changes and developments they have invested over the last 5 years means that we can understand our customer more, and ultimately convert our emails into visits.

Using targeted emails based on Airship’s PoP, we have been able to not only increase our SPH, but also allowed us to drive reactive sales and bums on seats! It’s been worth every penny, and has paid for itself over and over again in the short time we’ve had it.’

Big shout to the guys over at The Provenance Collection for using our platforms like true champions. Check out their Toggle webshop here to see them in action: https://shop.provenanceinns.com/