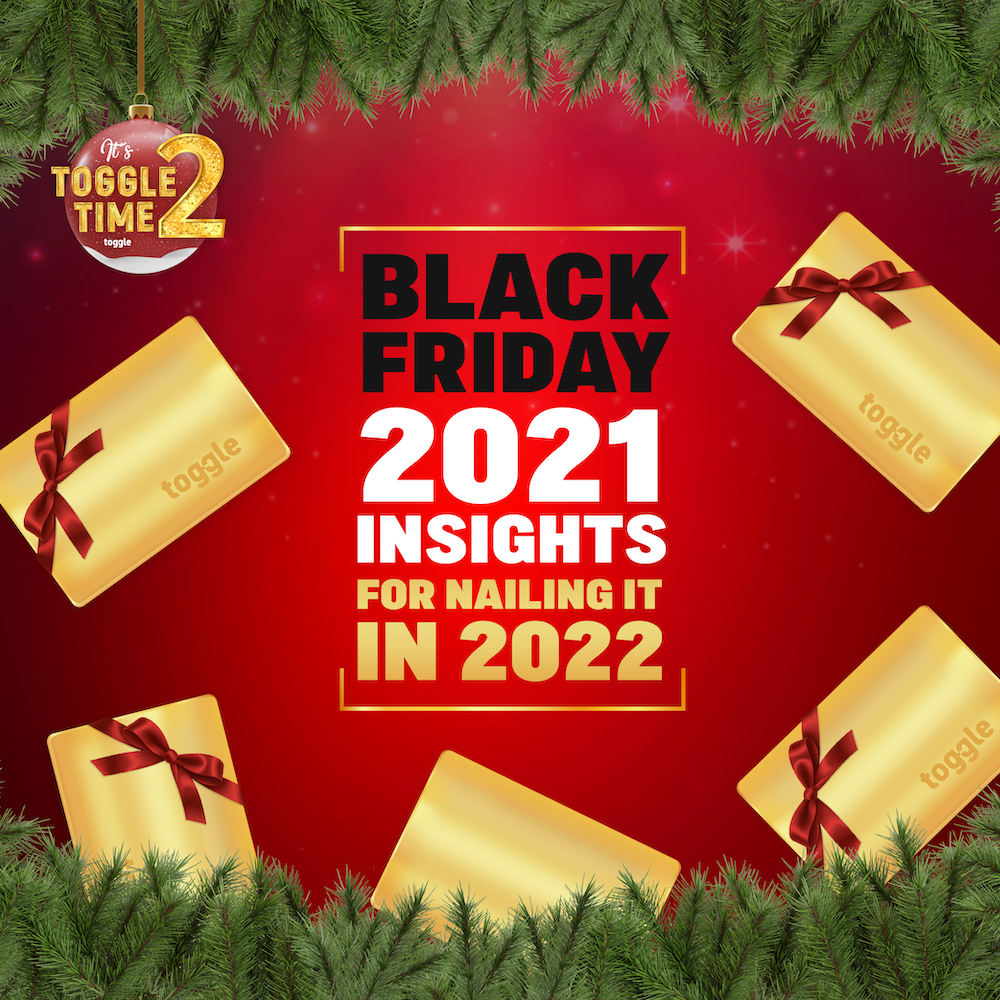 It doesn’t need an introduction, Black Friday itself is nothing new - but where it fits in with hospitality, and how best to approach it, is something that’s evolving. Here at Toggle, it’s one of the biggest days of the year for our Togglers. 2021 was our fourth Black Friday, and it’s grown massively every year. The more that’s gone before, the better we are at finding out what works. So, dig into this blog - there are some genuinely fascinating stats in there which tell you exactly what to do this year.

So, on to some quick stats

Before we share the highlights, here are some notes on where our stats are from:

People love Black Friday. Sales were up around 500% over the same time range on a normal week around this time of year - which is already pretty high! Digital is king. 67% of all sales were digital. 26% were postal orders, and 7% of gift cards were purchased in-store. The split between digital and physical is in keeping with normal stats, but a higher percentage of cards were done online rather than in-venue on Black Friday. This is really about the maturity of our Togglers who do well selling physical as an option in their stores.

Where are sales coming from?

Emails are the main driver. The vast majority of sales were prompted by email - it seems people are expecting it. Nearly half of all sales through Toggle can be linked back to an email sent through Airship, so this doesn’t take into account other email activity we didn’t have oversight of. Subject lines that were explicit about Black Friday and the discount available seemed to do the best. Customers knew in advance to look out for something special.

When we run through these stats in this section, ‘value’ means the face value of the card purchased, which is different to the money taken when considering the discount.

Even though it’s the most popular amongst our Togglers, 20% wasn’t the top percentage performer pound for pound (excuse the pun). For that, look no further than 25% for both Discount and Added Value. They fetched the highest value purchases (with  exceptions we’ll go into in a moment); £105 and £106 respectively.

High value, fixed (that is, a set amount of money, not a percentage) Added Value offers grabbed the top spots in terms of average value. There was big success with adding £25, which fetched average values £108. If you’re brave, it seems it’s worth your while putting together some high value offers; we sold a few cards averaging £262 for a £50 addition, while 6 £500 cards were bought that offered £125 extra.

The real star of Black Friday 2021, and something we’d highly highly recommend you try, is selling cards at a Discount or Added Value (obviously), but with a delayed validity. This means that any cards purchased with the discount are only redeemable within a date range of your choosing.

Some super smart Togglers sold cards at Black Friday that could only be redeemed in the quiet, early months of 2022. This gives you that big sales figure on Black Friday, without discounting visits in the festive season - instead pushing that footfall into the quieter January and February. It’s really smart, and it seems guests were more than happy with that offer.

Gift cards appeal to a broad age range. The day’s biggest spenders span across a large age range. Right from 26 to 55 years old. There was little to differentiate within this range, but 26 - 35 year olds did just top the spending totals. Beyond the 26 - 55s, 18 - 25 and 56 - 65 were next, where total spend was half of their middle aged counterparts. Spend dropped off substantially after 65+ years old.

With Black Friday sales spanning a few days, the spikes in traffic are less pronounced than previous years, but they are still there. On Black Friday itself, we saw spikes at 12pm and then again at 8pm. Purchases climbed quickly throughout the morning, starting in earnest at 7am, and climbing to a peak at midday. (The most popular hour in the day, when close to 10% of all sales were done.) The sales dropped off after this, until another sharp peak at 8pm. On the rest of the days, the purchasing was spread out pretty evenly throughout the day. This is likely because there is less urgency on the promotion, as well as weekends flattening the purchasing curve anyway.

‍Our top tip: Get in people’s inbox early. Schedule emails to broadcast at 3am so you’re first in the inbox.

Guests are happy to pre-buy credit with you for an incentive. They are often buying for themselves rather than as a present, so they are making decisions about where they want to visit.

Remember, all the revenue here is just the start for our clients. Around 20% of gift cards expire after 12 months (though it may be slightly less in this particular scenario). People will not often stop spending at the value of their gift card. Statistics from the GVCA say the average uplift in spend is 55% of the card value - and remember - they’re not likely to come alone. When a customer has bought a card as a gift, we know that 18% of those recipients will become a loyal customer. Their first visit spend is heightened by the fact that their visit is already paid for, and there is goodwill towards with your brand even before they step through the door. So you may be discounting, but those subsequent visits are worth a huge amount.