A Beginner’s Guide to: Being a Professional Cricketer and Winning Hospitality Marketing 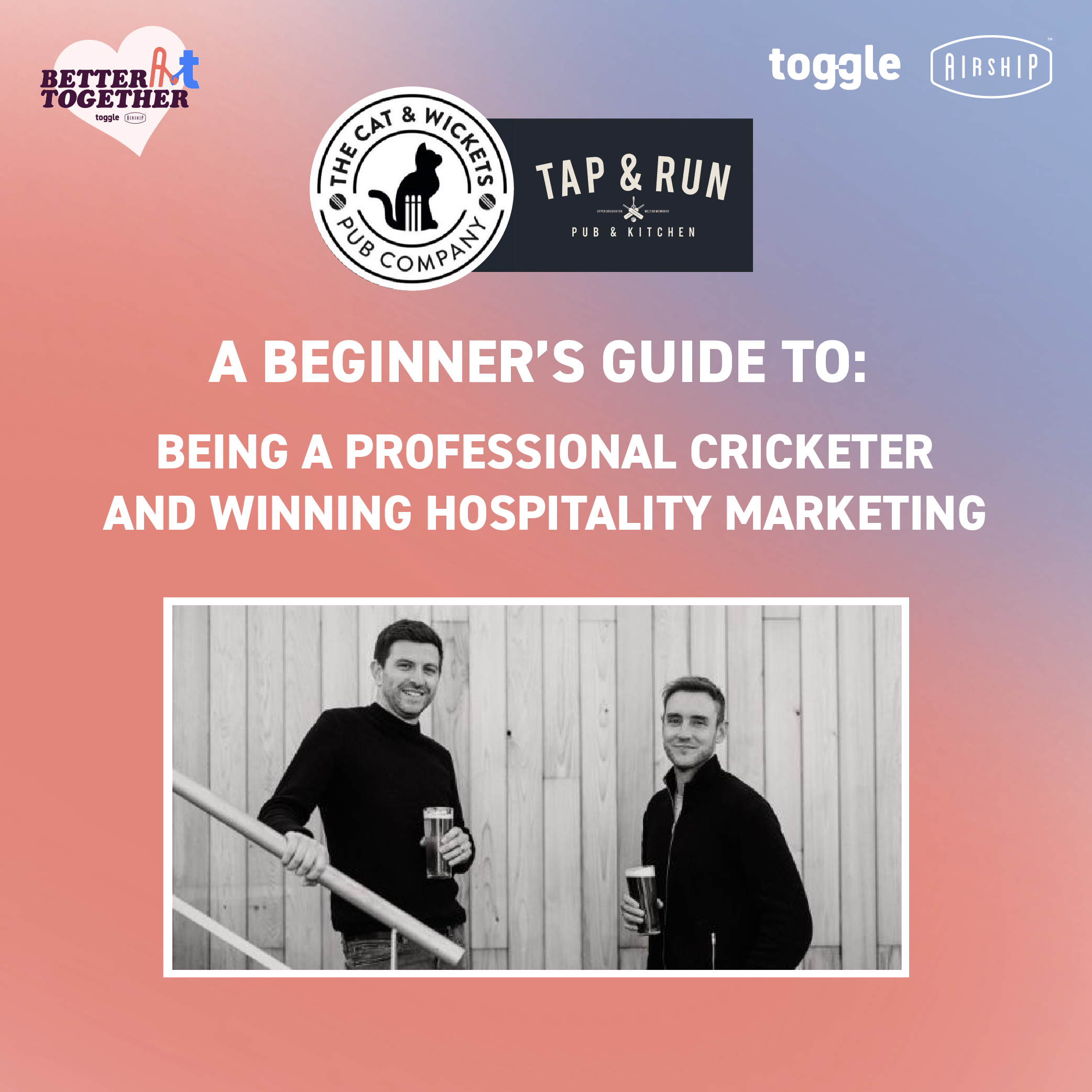 In 2016, ex-England cricketers Stuart Broad and Harry Gurney launched the Cat & Wickets Pub Company. Their flagship, The Tap & Run, is located in picturesque Upper Broughton in the Vale of Belvoir. These guys had no experience of gifting or CRM practices pre-Airship/Toggle, but they've smashed both their marketing operations just like they would a corky (this is our first and last attempt at cricket references in this entire thing, we promise).

Hospitality marketing isn't easy and, when you're new to the game, it’s difficult to know how to get started. Cat & Wickets had ambitious plans for growth off the back of their own operational success, and then they enlisted the help of Airship and Toggle to support them, after an introduction from our partners ResDiary.

What did they do?

After attending our ‘Flight Plan’ with Annica from 2Forks, a 12 week course on how to create amazing automated email journeys, Stuart, Harry and the rest of the Cat and Wickets team introduced a couple of things:

Firstly, they built a welcome journey designed to immediately build a relationship with new prospects. This series of emails is vital. The importance and influence it can have is incredibly important for that initial brand adhesion: giving them a friendly hello, and then taking them on a journey through who you are and what you're about.

Secondly, they created a 3 stage birthday journey. With their guest’s birthdays flowing in via the use of our tech integrations, they lean on Airship to drive bookings in the run up to the big day.

Taking a 3-stage approach gives them an opportunity to speak to their guests a month before, a week before, and on the day of the birthday. They will be using Airship’s email builder to construct the best emails automatically pull in Toggle birthday vouchers.

What were the results?

Out of the 240 Toggle vouchers that Tap & Run issued since they opened a year ago, there were a total of 82 redemptions - that’s a 34% redemption rate. With an average visit spend of £120 across 118 visits (and taking away the cost of a £10 RRP bottle of prosecco), you're looking at a £12,980 uplift from a single email… incredible.

Harry Gurney, one of the ex-cricketers and newest additional hospitality marketing legends, has said: “Dan promised me during onboarding that the birthday journey alone would pay for the cost of Airship many times over.  He couldn’t have been more right!  We have generated over £14k of sales from that journey alone.   This doesn’t take lifetime value into account either.”

Dan Brookman, CEO Airship & Toggle (and the guy that made the promise of ROI)

Huge props to the team over at Cats & Wickets for using our platforms in the best possible way, and becoming true marketing leaders. Make sure you guys stick around for our follow up article on how to become a professional cricketer too.