Happy Anniversary. Well, ‘happy’ may be an overstatement. Anniversary! 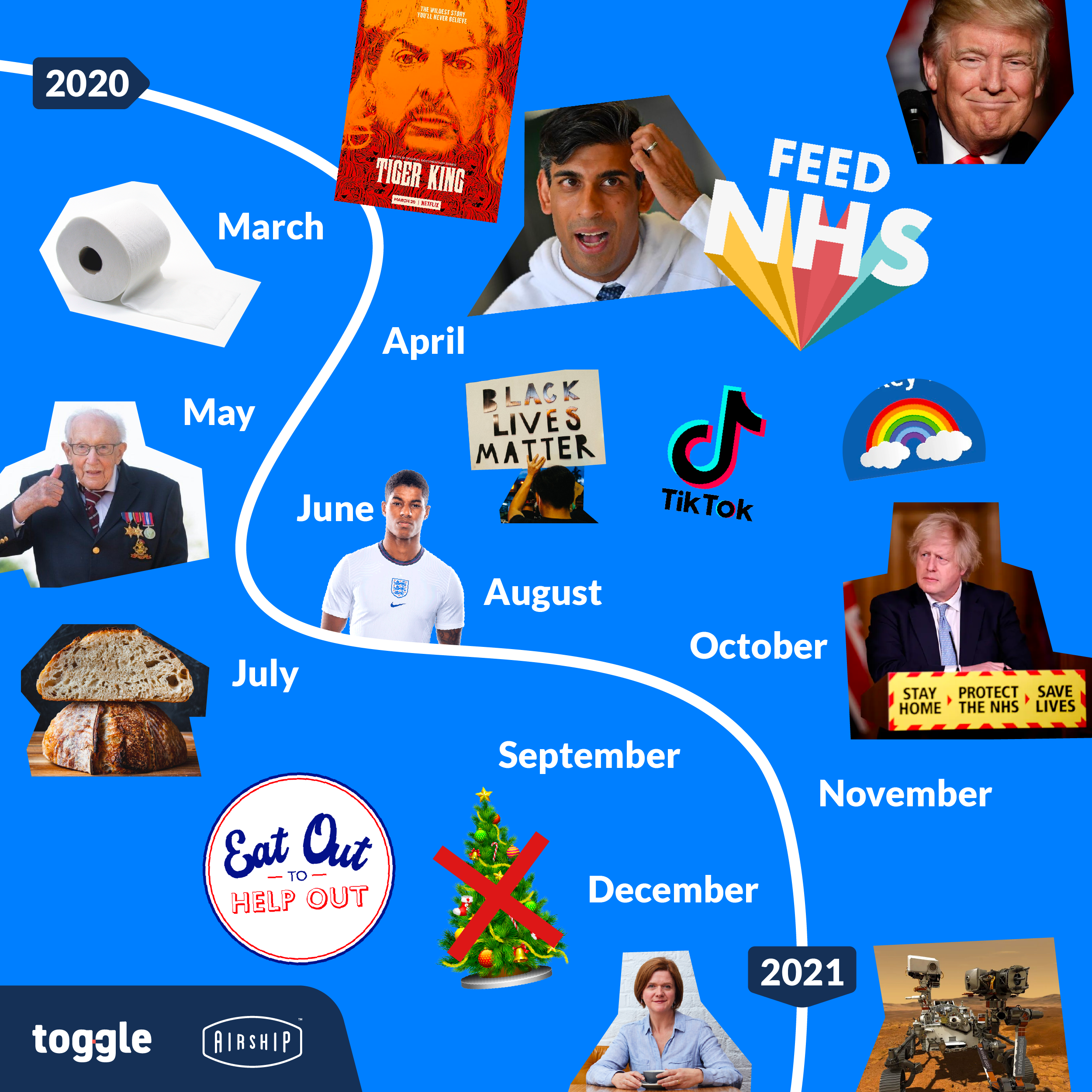 Boris Johnson announced the first national lockdown at 7pm on the 23rd March 2020. Since, we have all been adapting to the ‘new-normal’. It turns out, the new-normal is very, very strange. We can all agree, the last year has been emotional, filled with seemingly chaotic events, u-turns and a buzz of energy, mainly driven through anger and disbelief. .

In recognition of the impact that lockdown was going to have on hospitality and the fact that revenue streams were going to be severely curtailed for the foreseeable future, our first act as a business was to make  Toggle entirely free.

From April to July, everything became ‘at-home’! At-home workouts, at-home takeaways, and unfortunately – at-home haircuts (we quickly learnt how some things should be left to the professionals.) We seized every opportunity to leave the house; whether that was unwarranted Tesco trips or completing couch to 5k. We baked. We knitted. We formed obsessions with Tiger King, Tik Tok dances, and banana bread.

There was a rush of pivots from operators, Leon launched Feed Britain with a host of operators, Open Kitchens was launched to utilise closed businesses in towns and cities nationwide. An army of people driven by the desire to help, to not feel helpless, absolutely delivered.

One of Covid’s most scandalous moments was the Dominic Cummings fiasco. On April 12th, Dominic Cummings breached COVID-regulation by driving to Barnard Castle, claiming that he was ‘checking his eyesight’. In his defence, Barnard Castle does have a 36-sheet-billboard-sized seeing-eye chart on the side of it.

In response to Cummings’ newfound, rebel without a cause, temperament, Brewdog released their special edition ‘Barnard Castle Eye test’ Hazy Durham IPA. The company’s founder, James Watt, asked his 67,000 Twitter followers whether ‘Cummings & Goings’; ‘260 Miles’; ‘Stay at Homes’; or the winning choice, ‘Barnard Castle Eye Test’ would be most appropriate. They took to the shelves becoming an immediate fan favourite, with all profits going to free hand sanitiser for our NHS!

We responded immediately to government guidance released in June 2020 around the requirements for hospitality venues to reopen and built a fully-compliant and easy-to-use track and trace platform that provides a real-time record of customer activity: tck.to. Since then, we’ve been donating 20% of ongoing revenue to Hospitality Action and over 23m people have been recorded through trck.to, across 11,000 locations nationwide - including some of the biggest names in hospitality as well as transport hubs, sports clubs, theatres, retailers and places of religion.

Marcus Rashford - We’ll just leave it at that.

From July 4th, restaurants, shops, bars, and pubs were allowed to reopen their doors (as long as they operated in a ‘COVID-secure’ way. Since then, We have maneuvered our way through 10pm curfews, 2 more lockdowns, table service, Eat Out to Help Out, the rule of 6, and countless debates whether a scotch egg is deemed a ‘substantial meal’ or not. Did anyone ever get an answer on that?

Throughout summer, it seemed to be smooth sailing. Eat Out to Help Out got everyone out of the house and socialising again! Half-price food and non-alcoholic drinks in the month of August was accredited by the Financial Times as being successful, exceeding its expectations and serving 100m meals. You could say Eat Out to Help Out was almost as notable as Dishi Rishi!

The good times didn’t last very long. In September, Boris Johnson acknowledged the arrival of the second wave. By the end of October, it was announced that we were to enter a four week-long national lockdown. Throughout November, we reverted back to our familiar friend - solitary confinement.

Christmas was lost, but for thousands in hospitality, many for the first time, they got to spend time with family.

UKHospitality CEO, Kate Nichols, was awarded an OBE in the New Year’s Honours List for representing and helping the sector navigate the pandemic. Thanks to her meticulous lobbying, efforts, and dedication since March, hospitality has stood a fighting chance of survival throughout the pandemic.

Since January (as we are sure you are aware) we have entered our third, and hopefully final, lockdown. In this time, we have seen lawyers turn themselves into felines on Zoom, a newfound love for air fryers, Handforth Parish Council spiral into anarchy, Burger King make a very questionable tweet for International Women's Day, and who can forget Harry & Meghan’s Oprah interview!

There’s so many to thank. That will come later, when we can meet indoors, or outdoors, preferably not in the rule of 6.

We are now preparing for the relaunch of society. From April 12th, hospitality is permitted to serve customers in their outside areas. So, get ready to open those shutters, pour those pints, and serve our customers! We will #ComeBackStrong! There's still time to register for this Thursday's FREE masterclass training session with Victoria Searl, founder of DataHawks discussing how hospitality operators can take control of their post-Covid recovery using data.